After spending 5 days in Gisborne, I wasn’t sure where to go next so I stayed in Rotorua for a night.

This solo trip helped me realize a couple things.

1) Although it felt quite overwhelming at times, the gift of looking at a map and saying “hmm where should I go next?” is an affordance that most people in the world don’t have.
And for that freedom, I am very very grateful.

2) If you put me on an island with beautiful peaks and epic beaches, I will go to the coastline before the mountains.
In this case actually, only the beaches…

Rotorua is the most touristy town I’ve encountered in this country. Also, the smelliest.  It’s got some cool things to see, but you need a lot of money to really indulge in what the whole area has to offer.
I stuck with the free things and ended up walking around the town to see the cool geothermal areas. There’s loads of steam rising up from the ground where there happens to be a hole in the Earth’s crust. Such a fascinating phenomenon. It makes you think about how big this planet is, and how we’re pretty small in terms of its power.
Here are some photos of the first time I stopped in Rotorua. 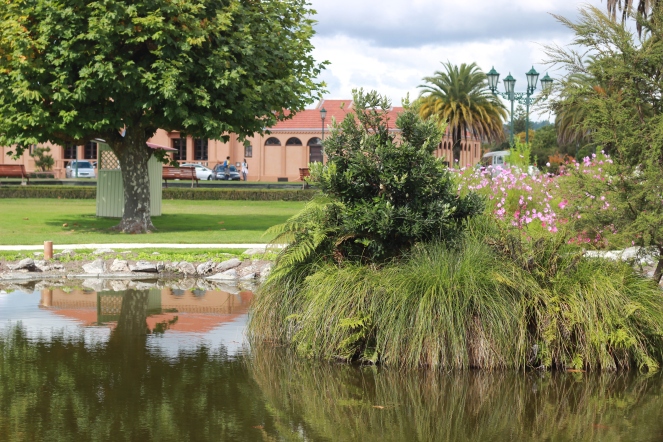 I stayed at Crash Palace, a hostel I would totally recommend for it’s awesome environment. There’s a hot tub, a pool table, free dinner on Fridays and a really good vibe going on.
I was pretty beat from traveling on a bus all day (funny how that happens), so I ran a couple errands (bought a load of bread, hummus and PB) and chilled in the hostel and skyped my sister. Eventually I went for a walk in the pouring rain to see more geothermal stuff. I didn’t know if I’d ever be back in Rotorua, so I faced the rain. I live in Vancouver, after all.

Rain clouds over a steaming lake

The rain stopped! And it was absolutely beautiful. I walked around Sulfur Bay listening to Radiohead and took pictures.
I met some cool people from France over dinner and went to bed really early to wake up at 5:45 for my bus to Hamilton, and then Raglan. 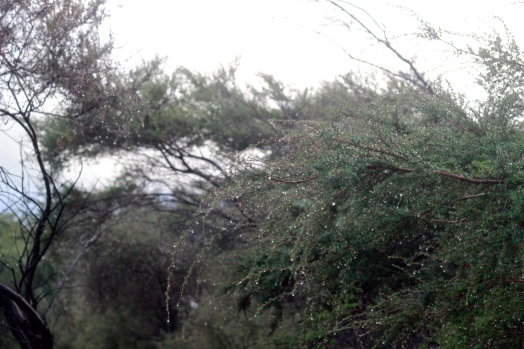 This is the one place I really needed to see, and have only heard about. Also my first time to the West Coast of the country!

You know that feeling you get when you realize you’re exactly in the right place? I experienced that as soon as I got there that morning.

The city bus driver told me because it wasn’t summer anymore, the bus didn’t go all the way out to where I was staying, so I’d have to hitchhike or walk 6km to where my hostel was out of town.
Although it’s known to be safe in NZ, I’ve avoided hitchhiking by using bus systems.
However, I was in Raglan, and for the first time in my life, I stuck out my thumb and caught 2 rides over to where I was staying near Manu Bay.

The place was called Solscape and it’s the neatest place I’ve ever stayed, although it wasn’t cheap and was the only available place in Raglan for the weekend (I was pretty last minute). Here’s a shot of the view from their mostly-vegan cafe.

View from Solscape
Naturally, and as you can obviously understand, I was f r e a k i n g out.

It was the Tofino of New Zealand right from the get-go, for those Canadians who know what I’m talking about.
I checked into my caboose (no joke, it was a refurnished train car with 3 bunk beds) and met my backpacking American roommate.

We put on my bathing suits and booked it over to where I figured a beach would be where I could rent a surfboard.
We went the wrong way and ended up at Manu Bay, which is definitely not the beginners beach where I belong.

Definitel doesn’t do it justice

Manu Bay from the top 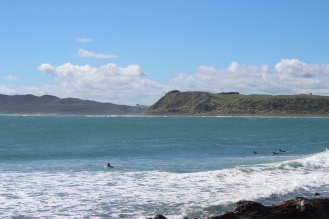 Doesn’t do it justice

After feeling pretty intimidated, I was relieved to find the right beach.
I got into the waves as fast as I could at Ngaranui Beach, on a rented 7’6.
I just basically laughed like a fool (not unusual), in the amazing sunshine and waves of Raglan, NZ.

I think this is the one place I’ve thought of my friends back home the most. I wish I could’ve dragged every last one into the waves with me. 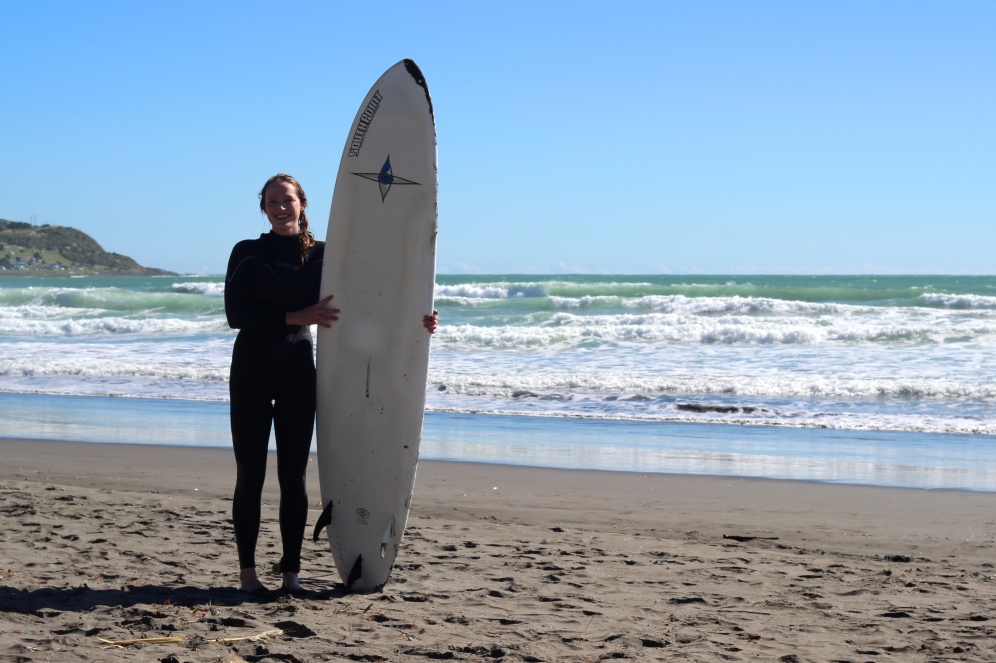 The sunset over Whale Bay was aight too. 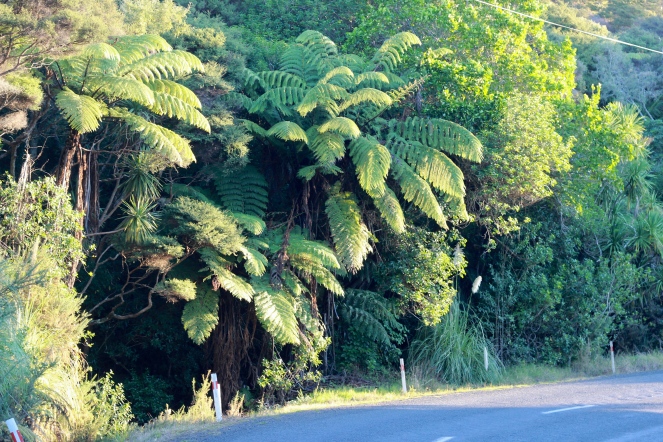 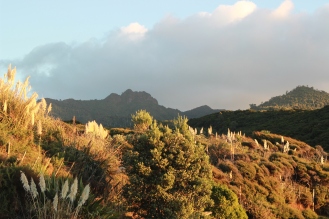 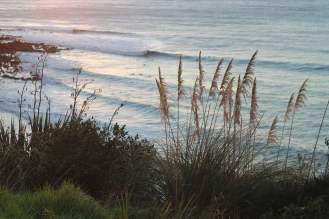 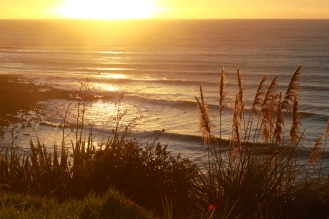 The stars were just as you can probably imagine, clear and spectacular.

Having a chai latte in the morning was alright too.
Wow, I’m spoiled.

I had never met so many Canadians in one place either! And most said they were from Tofino or Vancouver.
(Note the Storm sticker from Tofino.)

The morning I left was the morning of a massive storm, in which the waves were supposed to be around 17.5 ft. 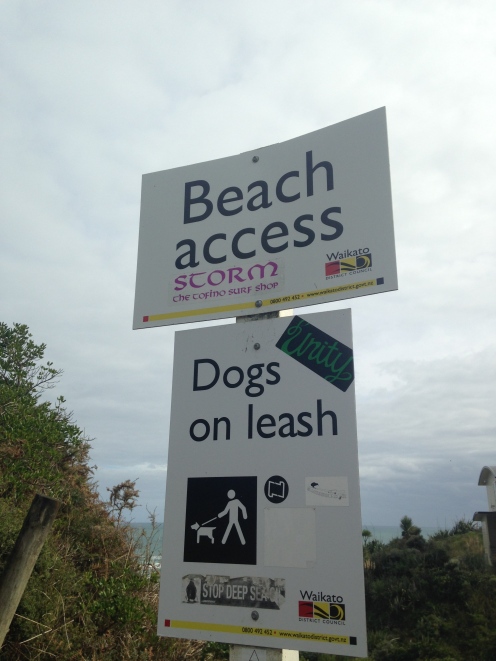 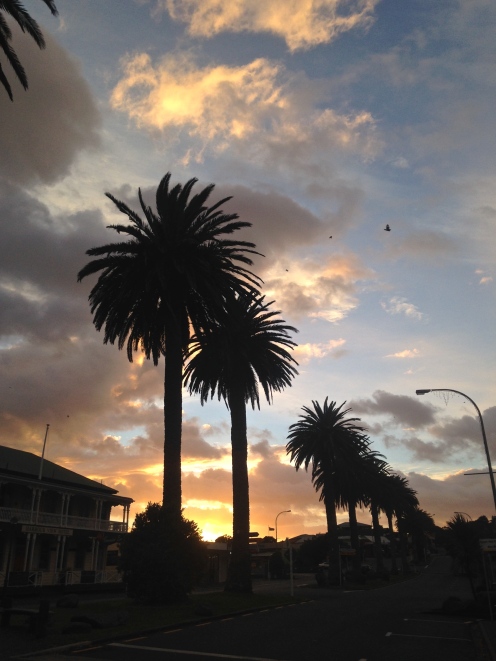 Epic sunrise after a storm

I could’ve left Raglan straight away and been forever happy, but nope, even more blessings were to come.
My family convinced me to do something New Zealand specific while I was on the North Island.
(They understand the YONZO spirit)
You’ve probably heard NZ has a lot of neato stuff going on…

I chose to get wet and dirty in an underground glow worm cave! Woo!
And unfortunately, I don’t have any pictures, so imagine it with me.

I went with Kiwi Rafting Tours and did the 5 hour wet tour.

I’ve copied and pasted the tour description was from their website:

One thought on “North Island: Rotorua, Raglan and Waitomo”