In short: The food here is unreal. I also went to Seoul and hiked the tallest mountain in Ulsan.

Recent findings:
1) waiting at a traffic light can literally take 5 mins because of the funky traffic pattern, making my commute time 5 or 15 mins on the bus
2) no one says bless you after a sneeze
3) no one says thank you when getting off the bus
4) there are NZ Whittaker’s chocolate and Tim Tams here..
5) it smells like kimchi poops when you walk down the street because sewage is collected under the streets with the rain water
6) there is Korean raggae, and it’s good (see below)

For the Korean Thanksgiving, or Chuseok, I made my way 2.5hrs North to the capital.

I met my new Seoulmate and fellow Canadian (also teaching English), Fatima, on the KTX platform and we made our way to a great hostel in Hongdae (Chingu Hostel, which I highly recommend).
Hongdae is an artsy fartsy district, with heaps of young people attending Hongjik university, among others, and great street music and dancers at night. One night we left a bar at 5am, and there were still hundreds of people out and about.

Seoul never really sleeps, as I’m sure you can imagine.

We visited the Gyeongbokgung Palace and saw a traditional change of guards.

Fatima, Kathleen and I rented Hanbok for a couple of hours and felt like Disney Princesses. We got to choose our own colours and had people help us put them on.

Korean people on the streets stopped us to take pictures with their children. It was a serious ordeal and we soaked it up!

We kept laughing because we were all wearing socks and Nikes under our beautiful dresses. I personally, was wearing high socks with Charmander on them.
Not to mention my dress was a foot too short… tall people problems.

Honestly, what a blast.

Afterwards, I ended up at a flat party in Gangnam with only Spanish speaking people.
It’s a long story as to how I got there, but I can assure you I will never forget it (and my Spanish has not improved).

Tell you what.. I’m pretty sure people in Seoul are 1000x more fit because of the sheer number of stairs they have to climb to get onto the actual train.

The next day we met a beautiful Israeli mother and daughter from Jerusalem on our way to the Han River, or Hangang.
Not only were they the warmest people I’ve met in a long time, but they had a bag of Bamba in their backpack and they gave it to me!

What a clear and clean sky, amirite? 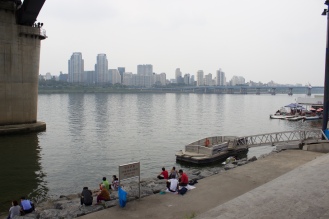 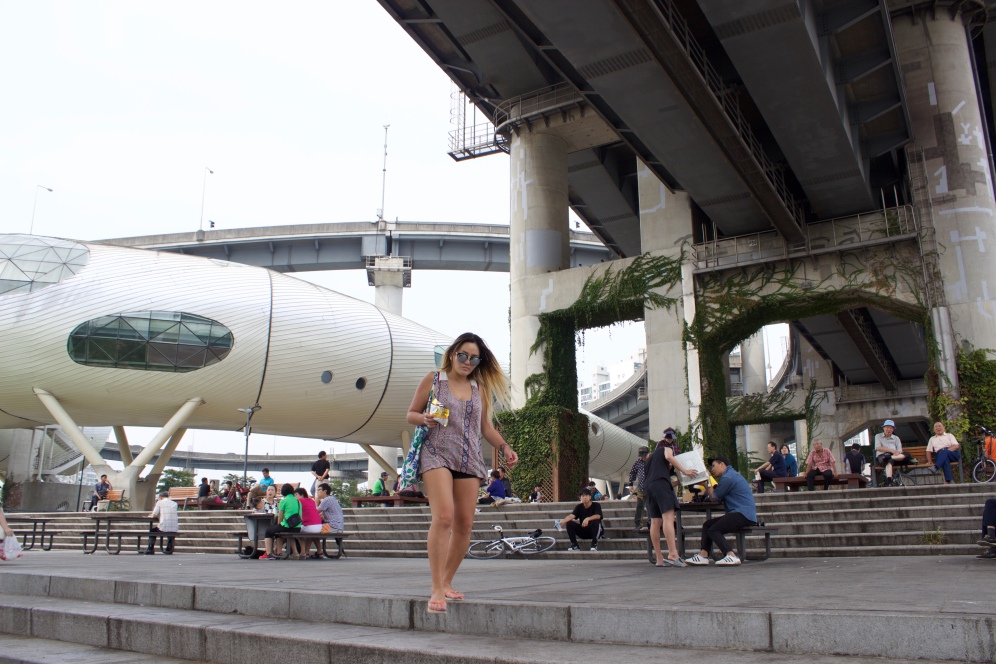 We rented some silly duck shaped paddleboats and hung out on the river for a while. 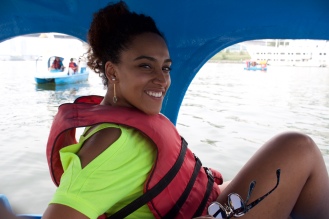 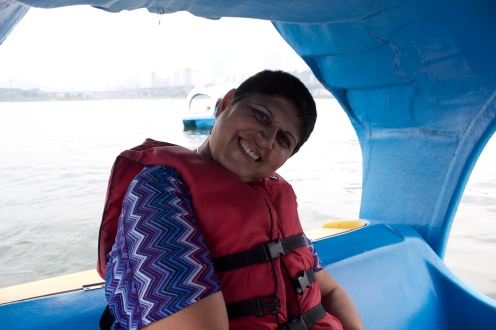 Next up, la-coon ca-pé, or a Racoon Cafe.. because those exist in Korea. 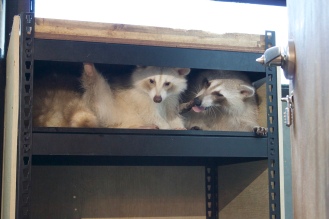 Guys, I know... what the heck.
I was so excited at the idea, but truthfully, upon arrival I wasn’t having any of it. The raccoons were all sleeping and it smelled weird.

I guess I must tell you a story to give you some context on my discomfort.

My sister and I grew up with a family of raccoons living in our neighbour’s attic.
The mom and dad raccoon we named Pablo Petey Pebbles and Petunia, naturally.
We were horrified to find out that one day the week-old ham we always left out for the neighbourhood cat (appropriately named Hammy Cat) was actually being eaten by raccoons. (I understand there is a lot of weird stuff happening in this paragraph that you may question, but please save it for another time).
Growing up, I was afraid to go outside in our backyard at night because  PPP and P, and eventually their 3 babies, were lurking out there. They owned the place. They weren’t afraid. We would make noises to scare them and they would roll around on our desk chairs and table. They’d stand on their hind legs and look into our house, plotting some way to get inside and eat everything, including us. All we’d see were their glowing beady yellow eyes.
It continues.
They would have a small party in our garbage bins, eat all of our grapes off the vine, and would climb in our trees and eat all the baby birds in our birdhouses. Whenever we went out of town, my family would always joke about the raccoons having a party in our house without us there. (Cheeky creatures, of course they wouldn’t invite us).

I can confidently say that la-coons are a menace to human kind, and I had just paid money to go drink a weak Americano next to 5 sleeping “domestic” ones, if that’s even possible (I’m sure they’re pretending to be proper).

And suddenly, out of nowhere, there was a raccoon (what I considered at the time) attacking my foot.

The only awake raccoon had chosen me. Chosen ME, to harass.
He clambered up next to me, attempted to steal my camera, bracelet, and sunglasses, but he had chosen me. I was impressed with his taste in valuables, terrified, and also completely honoured. I had never let myself come this close to the foul creatures, but here I was in a cafe with 5 of them.

I left undercaffeinated, and probably smelly, but with a satisfactory raccoon experience. Check my insta for a summary photo of my encounter.

I met tons of beautiful humans in Seoul. Spaniards, Argentinians, Brasilians and a whole squad of fun-loving Canadians.

I visited the Hangang again on our last night, and caught the sunset.

For my Vancouverite friends, that doesn’t sound very impressive, but I can tell you it was a challenge. The humidity in the forest, as well as the sheer steepness for the first 3km made this one heck of a hike.
I went with Fatima, who visited me for the weekend, as well as Marcos, a Brasilian exchange student that I met at the hostel in Seoul (love you man). Thumbs up for friendship!

At the start of the trail, there was a little restaurant that we stopped at before and after our hike. 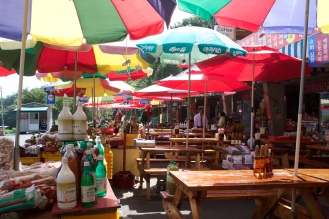 We started our hike and immediately ascended some hella steep hills.

Keeping track of the correct path and staring at the ground for good footing, I realized that  being on a mountainside in the middle of a forest was the first time I felt comfortable and competent in Korea. I was finally good at something, and there were no stares or confused looks to throw my confidence.

There were emergency signs all along the path, in case you forgot who to call during your heart attack 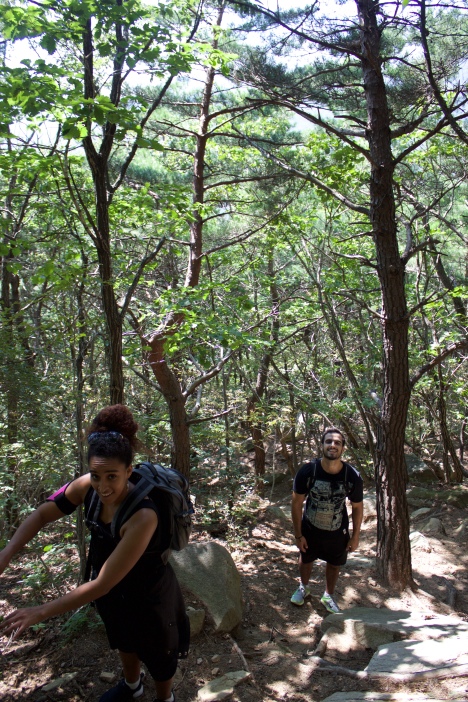 Words can’t descibe how good it was to summit Mt. Gaji. Drenched in sweat and muscles burning we earned a nice break on top of the tallest mountain around. 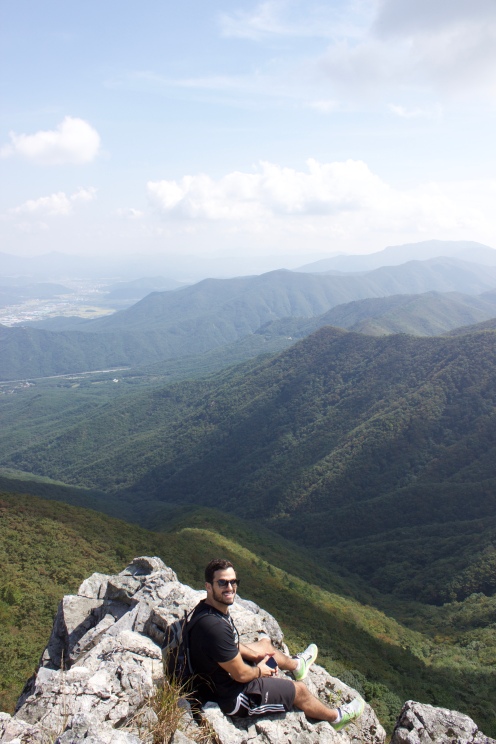 Gajisan was also the first place I had full conversations with fellow Korean hikers, and they didn’t leave with confused looks or chuckling to themselves.
I can’t speak Korean, but I can meet people for the first time pretty well. That’s something, right?

On our way down, we visited Seoknamsa, a gorgeous Buddhist temple nestled into the mountain’s heart.

The temples are in Korea are indescribable.
Every one is beautifully adorned in colours unimaginable. This one had a massive ancient fountain to drink from, which we really needed.
When we looked up, we could see the peak we had just descended from.

We were living inside a calendar.
We cooled our tired feet and washed our salty skin in the most pristine river. The Koreans enjoying their Saturday in the hills watched us, as always.

The three of us agreed that it’s hard to be a foreigner in Korea, but if we continue to look for these little pieces of freedom and joy, we can find a home here. Yay for positivity! 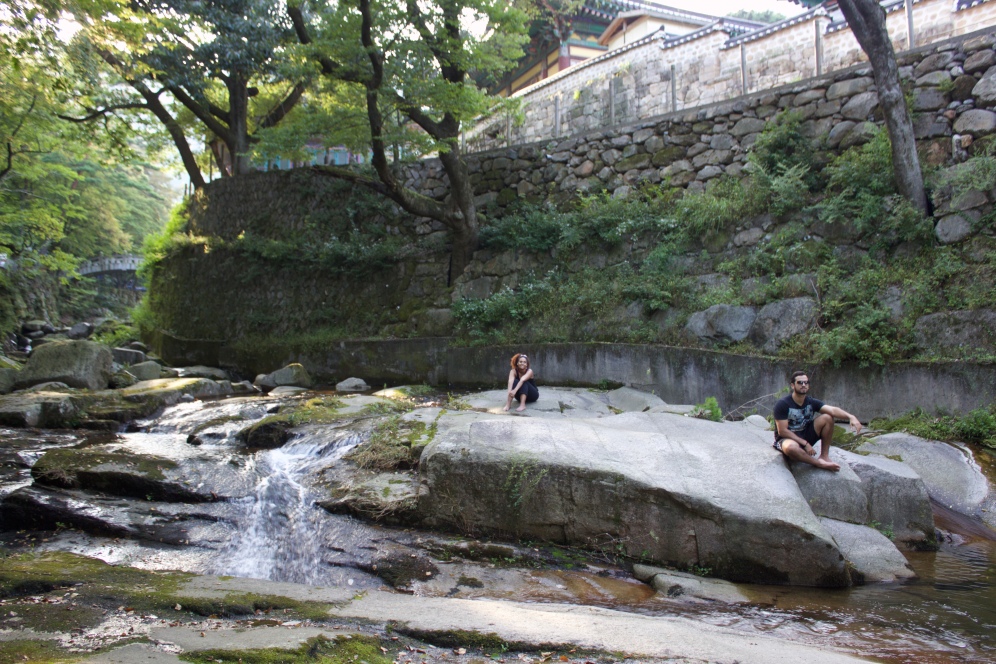 Next stop, some more beautiful weeks of teaching, maybe a surf festival and a bday weekend in Busan! Cheers fam.

[Mom and dad, I hope you enjoyed the raccoon throwbacks. I hope you’re not leaving meat outside now that you’re empty nesters.]